You are here: Home / MRI for Carbon Monoxide Diagnosis is Making Strides

The value of MRI for carbon monoxide diagnosis is increasing each year. Improved MRI resolution provides the images with greater detail[1]. Shorter scanning times makes the images sharper. New MRI protocols are providing better information about brain function.  While these improvements have only improved the imaging findings for other brain damage, it has changed the landscape for the use of the MRI for Carbon Monoxide cases.

For Our Treatment of Brain Damage after CO click here.

MRI and other diagnostic tools are not stand alone tools for to diagnose brain damage after carbon monoxide. The exception is that lesions in certain areas of the brain are so specific for carbon monoxide that it may be the only thing on the differential diagnosis.[2] In understanding the role of MRI for carbon monoxide poisoning, it is important to understand that CO poisoning starts as an ischemic event, where the initial damage is from hypoxia. Hypoxia and its more severe cousin anoxia are caused by failure of a cell to get enough oxygen. Carbon monoxide takes the place of oxygen in the blood and thus brain cells can be asphyxiated. As the blood is circulated through the body evenly, one might expect to see symmetrical damage on MRI. But that is a misunderstanding of all of the causes of brain damage from carbon monoxide.

But the bilateral nature of hypoxia is only a small part of the brain damage that occurs after CO poisoning. It is believed that inflammatory mechanisms and immunological over-response – which goes on for days or weeks after the poisoning ­– causes the most brain damage. The body senses CO as a poison and over reacts to this poison in destructive ways. As MRI technology has evolved, far more lesions are found and those lesions are just as likely to be one sided as bilateral.[3]

Understanding the Alphabet Soup of Diagnosis

Each generation of imaging the quality of the scans gets better. With each improvement in MRI, resolution improves, new protocols are developed, more brain damage from carbon monoxide poisoning is identified. As an MRI is a digital machine, the generations can be short on some improvements and much longer on others. New protocols are developed often. It takes a much as 10 years for the magnets themselves to be updated, as MRI scanners are expensive machines. The smallest lesion a 3Tesla MRI can see is approximately 1 mm. Thousands of axons can be damaged in an area that small and still not show up on even the best scanner used for clinical use today.

The state of the art MRI includes the following sequences:

Though neurons are too microscopic to be imaged by even advanced MRI magnets, when countless neurons and axons die in a structure, that structure becomes smaller. When a structure shrinks, the CSF will occupy more area around that structure. Thus, brain atrophy can be seen on an MRI. NeuroQuant can show these losses statistically. In addition, neuroradiologists can diagnose brain volume loss independently. 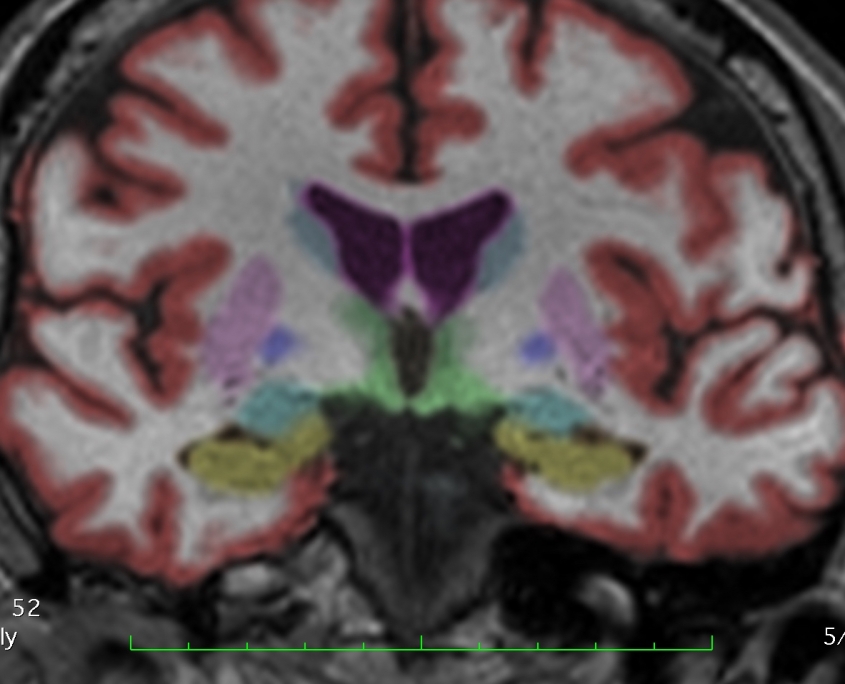 The sensitivity of MRI for carbon monoxide diagnosis is rapidly increasing as new protocols are developed. Shown here is a coronal NeuroQuant image.