Gordon Johnson testified on carbon monoxide poisoning in front of the U.S. Consumer Products Liability Commission with respect to the dangers of portable generators. Attorney Johnson was the only personal injury attorney asked to participate in this public hearing for the new CPSC regulation on carbon monoxide emissions.

Attorney Gordon Johnson testified on Carbon Monoxide beyond his prepared remarks, which were filed with the CPSC prior to the hearing. Rather than reading from his prepared remarks, he addressed the issues he felt were most important that had not been fully presented during the day’s hearings. In addition to Gordon Johnson, the panel included experts from all over the United States, including a medical doctor, several portable generator industry representatives, experts in emission controls, experts in carbon monoxide detection and toxicology.

In his prepared remarks, Gordon Johnson testified on Carbon Monoxide that the portable generator issue is one of the most serious product liability crisis that the United States has seen. He filed with the Consumer Product Safety Commission a graph that showed the relative size of the portable generator crisis, with other well publicized product liability issues over the last generation. 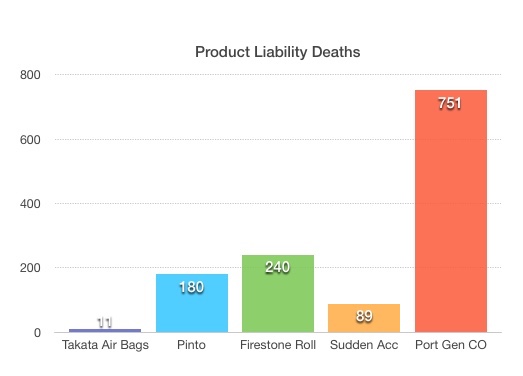 Gordon Johnson testified on carbon monoxide before the U.S. Consumer Products Safety Commission in March of 2017, comparing the magnitude of the problem from portable generators to other product liability crisis of the past.[1]

In his prepared remarks he said:

There can be no denial today of the magnitude of this problem. I prepared this graph to demonstrate the relative danger that unclean CO generators pose to known product liability catastrophes. The only products which I can think of which are more dangerous than portable generators are cigarettes, alcohol and cell phones. I compared portable generator deaths to those involved in the Takata Air Bag, Ford Pinto, Ford Firestone Rollovers and the Sudden Unexpected Acceleration of Cars. The severity of this problem is shown by this graph.

Before Gordon Johnson testified on Carbon Monoxide at the CSPC, he stated in his prepared remarks:

What is far more serious to CO survivors than for those who suffer a concussion is that the symptoms don’t just get worse over the first 48 hours, but often the next 48 days. Delayed onset of symptoms has its own label: DNS or Delayed Neurological Sequelae. Yet those who suffer it are always mystified by its disabling onset since the emergency room personnel never heard of or warned about DNS. Carbon monoxide poisoning should come with its own discharge instructions, but it is treated as a binary result. You survive, you are okay. This ignores the poisoning side of carbon monoxide poisoning. Surviving a carbon monoxide event is not the same as being denied air for a brief time. CO is a toxin and it triggers an immune response in the body that can be create as severe of an overreaction as a sprinkler system going off to put out a candle.

For more on what Gordon Johnson testified on Carbon Monoxide, see these links:

[1] The above fatality numbers are taken from internet accounts of the magnitude of such product failures and are for illustrative purposes only. Such numbers are not intended as specific representations of the number of people who died as a result of any specific failure. The 751 deaths from portable generators is based upon the CPSC materials in support of this proposed rule. The sources for these numbers are: